Our School
Why Us?
News
More information
International 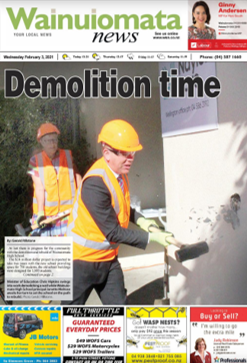 On 27 January a Rebuild Celebration was held to mark the official start of the Wainuiomata High School Rebuild. Article (Wainuiomata News - 03 February 2021) reads:

"At last there is progress for the community with the demolition and rebuild of Wainuiomata High School. The $24 million dollar project is expected to take two years with the new school providing space for 750 students, the old school buildings were designed for 1,000 students.

Students, dignitaries, teachers, politicians and contractors gathered to celebrate the start of the rebuild with Minister of Education Chris Hipkins and Wainuiomata High School Principal Janette Melrose taking to the old buildings with sledge hammers. Janette says it has been a long slow journey to get to the rebuild. Originally Parkway College the school was built in 1972 and was merged with Wainuiomata College in 2002.

In 2007 the Ministry of Education began investigation into replacing the buildings and plans were made but the Christchurch and Kaikoura earthquakes occurred so the plan to rebuild Wainuiomata High School was pushed back. With a pledge from Prime Minister Jacinda Adern in 2018 that if elected she would see to it that $24 million was provided for the rebuild she has made good on the promise.

Janette says over the past three years the school has focused on modernising the way they deliver their student centred, integrated, community connected, flexible curriculum. "We have moved away from traditional subjects and moved towards student selected courses" she says. They have one day a week where students focus on a project that they are interested in and passionate about connected to the community.

"We are firm believers that if students are interested in what they are learning and it is relevant and meaningful to them as learners then they are more likely to be engaged and more successful." Janette says a debt of gratitude goes to the team from Stephenson & Turner for listening to the staff, students community and Board for designing buildings unique and relevant to the students and the community.

Speaker of the House list MP Trevor Mallard, who did the original review of the site and buildings, says he does regret deciding to rebuild on the current site. "There was a decision I know regret to site the school on this site, we knew there were major engineering problems on the other site and it would require a total demolition because some of the buildings had concrete cancer. With retrospect it probably would have the students at the current site and demolish the old college and rebuild there but I am pleased we have come to a really good resolution, " he says.